lauv'abrarc (with a lower-case "L"), also known as the Lustful God, is the God-King of Lusst'ghaa, the extra-dimensional plane. He is part of that world's Trinity.

It was he who remade the inhabitants of Lusst'ghaa into the Changed and the Entralled.

A long time ago, the God-King decided to elevate the inhabitants of Lusst'ghaa to a state of mindless ecstasy, since he thought sexual pleasure to be the ultimate happiness. In order to achieve this, he wanted to force his people to undergo several transforming operations. The first one to support his cause was Ac'mlale, the Inspired Mistress of the Caste of the Seekers, who taught lauv'abrarc to use Essence. A part of the society of Lusst'ghaa, the Caste of the Omniscient, led by Zhadhr'ithesz, however, opposed this plan. At least one of the Omniscients, Ughro'ecna, betrayed his caste to join lauv'abrarc, teaching him how to use Omniscient technology. A civil war began, and in the end, the Caste of the Omniscient were defeated at the city of Ngaarren.

After his victory, the God-King turned his followers into the Changed, beings who felt only lust and orgasm. The defeated Caste of the Omniscient, including Zhadhr'ithesz, became the Enthralled, their living sex toys that felt nothing. After this the God-King worked his changes upon himself too. Unlike the Changed, lauv'abrarc kept a fragment of his mind (in the Golden Goblet). Though he experienced less pleasure than the Changed, however, due to this his mind had not been animalized. This was done in the Chamber of lauv'abrac, and from this point he became the Lustful God.

However, by changing Lusst'ghaa into a land of eternal ecstasy, lauv'abrarc had violated a law of the universe set forth by the Demiurges. Lusst'ghaa ceased to change and evolve. It became static. The Demiurges unleashed a cancer upon Lusst'ghaa, quickly infecting the Enthralled and eventually the Changed, dooming the entire dimension. Iauv'abrarc attempted to leave Lusst'ghaa to transform other worlds into lands of eternal ecstasy, but the Demiurges captured him and imprisoned him in Xu'thrar, within Lusst'ghaa. Iauv'abrarc then sent psychic messages across the universes, hoping to bring about his freedom. On Earth, these messages were heard by those with Seeing abilities, manifesting in haunting visions of Lusst'ghaa.

With the arrival of Victor Holloway, Iauv'abrarc finally had his chance to escape Xu'thrar. Victor is the avatar of Ughro'ecna. This means he alone has the ability to open Xu'thrar, as Xu'thrar was constructed using Omniscient technology and Ughro'ecna was once in the Caste of the Omniscient. Should the player choose to, at the end of Lust from Beyond, Victor can open Xu'thrar, freeing Iauv'abrarc and allowing him to emerge on Earth to transform Earth into a land of eternal ecstasy.

Lust from Beyond: Prologue (Spoilers)

There is a depiction of Iauv'abrarc as the Lustful God in the Cult of Ecstasy mansion.

According to the game developers:

The most common forms of writing the name of the God of Pleasure are "lauv'abrarc" and "Iauv'abrarc". One begins with lowercase "L", the other with uppercase "i". It was from the similarity of both and lack of understanding of the origin of this name, that the erroneous, second form was born.

According to information released by developers, there's a meaning behind writing the name beginning with a lowercase letter, rooted in the genesis of the Land of Ecstasy. lauv'abrarc transmuted beings of Lusst'ghaa into entities of constant ecstasy, but did not change himself. To keep reign over Lusst'ghaa, he could not attain the eternal pleasure himself, as this would lead to the imminent collapse of the Gates of Eternal Completion. Because of that, the God of Pleasure is also called the Great Martyr.

This event proves, that for lauv'abrarc it is his work, the Lusst'ghaa, that's infinitely more valuable than himself and his pleasure. Therefore, writing his name beginning with a lowercase letter is meant to convey the idea of him being the Great Martyr.

This explanation eventually made it into Lust from Beyond as an in-story text in Sabinian's Mansion. This wiki page uses the lower-case "L", but the page name capitalises it in the title. 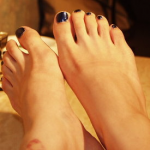 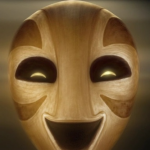