Bleakmoor is a town in Massachusetts that is dominated by the Scarlet Lodge. The mayor of the city is Richard H. Bleakmoor. Locations within it include the Eden Theatre, Austerlitz's Office, and Hotel Desire.

According to developers, Bleakmoor is modelled on New Orleans. However, the decision to place it in Massachusetts is due to the works of Lovecraft, a number of which are set in that part of America and whose writings influenced the Lust series.

The Bleakmoor Community Center, within which is a lounge commissioned by Charles Austerlitz in honor of his grandmother.

Willie's restaurant with a broken lighting system, all too common in Bleakmoor. 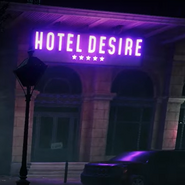 The therapy practice of Dr. Austerlitz.
Community content is available under CC-BY-SA unless otherwise noted.
Advertisement